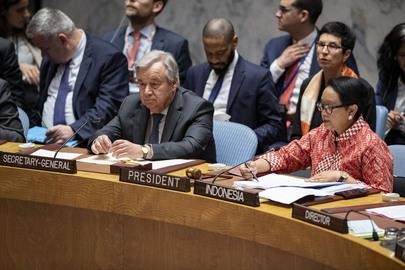 Towards a Gender-Sensitive Approach?

On 23 May 2019, the United Nations Security Council held the annual Open Debate on Protection of Civilians in Armed Conflict, under the Indonesian presidency. The debate aimed to address the involvement of local and affected communities, protection of civilians mandates in peacekeeping operations, and mechanisms to prevent the escalation of armed conflict. Key themes that emerged from the debate were: addressing targeting of medical services, hospitals, schools, and places of worship; safeguarding and implementing international humanitarian law; targeting of violence against vulnerable groups and sexual violence; lack of accountability for violations of international humanitarian law; and adequate financing, clarity, and training of peacekeeping missions.

This year, the debate comes at the heels of Security Council Resolution 2467, which introduced a survivor-centred approach to the issue of sexual violence in conflict. Considering that women are heavily impacted by armed conflict in grave and intersecting ways, and as the SG’s report points out that women and girls with disabilities are particularly at risk of violence, exploitation and abuse, it was a missed opportunity not to invite a woman briefer to the Protection of Civilians debate. Further, the debate ignored the critical subject of masculinities, as as part of a broader gendered perspective. Only 23% of Member States addressed the subject of sexual and gender-based violence, and only 1.3% mentioned survivor-centred approaches to responding to conflict-related sexual violence.

The 70th anniversary of the Third Geneva Convention and 20th anniversary of the first UNSC Resolution on Protection of Civilians must serve as a reminder to Member States to meet their duties to implement commitments that respect human life and dignity enshrined in the conventions and resolutions, including the lives of women and girls. Human rights, including women’s human rights, and gender equitable international humanitarian law must inform every aspect of efforts made by the UN, governments, and civil society.

Resolution 2417 links armed conflict and food insecurity and calls out denial of humanitarian access and the use of starvation of civilians as a method of warfare S/RES/2417 (2018)
Resolution 2286 focused on attacks on health care workers and facilities in armed conflict S/RES/2286 (2016)
Resolution 1674 linked the protection of civilians in armed conflict with concern for the illicit trafficking of small arms and light weapons, and the use of these weapons against civilians in armed conflict S/RES/1674 (2006)
January 2019 Letter from Poland to President of the Security Council: outcome document of Arria-formula meeting on raising effectiveness of atrocity crimes prevention S/2019/48 (2019)
Presidential statement focused on trafficking in persons in situations of conflict, with focus on ISIS and the impact of violence on vulnerable groups, including women and children S/PRST/2015/25 (2015)

Evaluation of the implementation and results of protection of civilians mandates in United Nations peacekeeping operations Report of the Office of Internal Oversight Services: A/68/787 (2014)
OHCHR: Report on International legal protection of human rights in armed conflict (2011)
Joint Statement: 22 NGOs Call for Action to Strengthen the Protection of Civilians in Armed Conflict
Global Justice Center: Holistic Care for Victims of Conflict-Related Sexual Violence
Medecins Sans Frontieres: Return to Abuser – Gaps in Services and a Failure to Protect Survivors of Family and Sexual Violence in Papua New Guinea
WILPF WPS Programme: Towards a Feminist Security Council Guidance Note